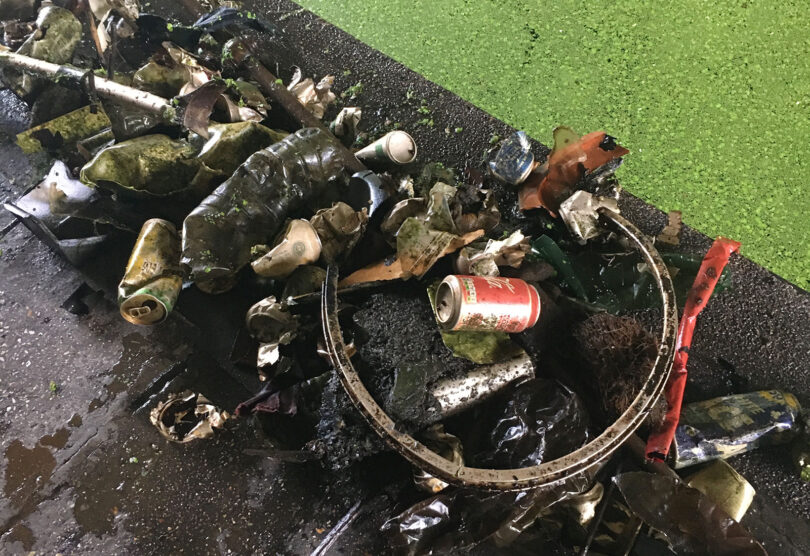 If you follow the growngals instagram feed you’ll have already seen pictures of my weekly canal clean-up. A friend suggested I write about it but I don’t want this to be a post about virtue signalling. Instead I want to explain how empowering it is to effect change, no matter how small, or niche.

The Regent’s Canal in de Beauvoir, East London, has never been clearer than it was this spring and summer. It teemed with tiny fish, the swans bred and dragonflies hovered. It’s the result of the work of a small team of volunteers called The Wildlife Gardeners of Haggerston. They’ve spent the last five years rewilding this stretch of water and the transformation is profound. Floating islands have been planted with native aquatic flora to filter the water and create a new wildlife habitat. It is a bit of ecological magic.

The bridge of rubbish

Then, as you walk along the towpath, the fish and the underwater forest give way to a pile of unsightly rubbish reminiscent of a river in Delhi. A bridge traps the litter like a funnel which is then churned and broken under passing barges. I found this so disturbing that I set about contacting the Wildlife Gardeners to ask how I could help.

It flies in the face of feminism to admit it but I do love cleaning. I’ve written about it before, including an A-Z of eco friendly spring cleaning tips. The idea of a canal clean-up was right up my street. I was handed a two metre litter picker and a grappling hook. It was then I realised there is no easy method of getting the rubbish out while protecting the wildlife and fragile ecosystem.

I’m lucky to be joined each week by my other half and our dog – though none of us relish the 5.30am alarm going off on a weekend. We start early because the canal is busy with joggers and cyclists by 8.30am. Litter is removed piece-by-piece with the long-handled picker and we use the hook for bigger items like tyres and traffic cones. Everything is bagged up at the end but not before we swill back all the tiny fresh water shrimps and shellfish that come out with the rubbish.

I have no idea how we will collect the stuff beyond the 2 meter reach of the litter picker. Someone mentioned using a paddle board and that sounds like a good idea. Plenty of passers-by suggest the use of a dredger but can you imagine how much damage that would do? We have to stop thinking about how to do things quicker. If we want a future that includes birds and flowers and fresh clean air we have to protect the insects and invertebrates further down the ecological food chain. There will be no dredging on my watch.

It can be disheartening. when the canal is covered in duck weed it is impossible to see what lays beneath. Our early start can coincide with late night revellers making their way home, yelling instructions. In contrast it can be incredibly peaceful, just us, the birdlife and the sunrise. On these days we don’t want to leave – just one more can, glove, iphone, curtain pole – before we call it a day.

A tidal wave of litter

The big kick is doing something, anything, to make a difference. It feels good. The tidal wave of litter and plastic that pollutes our planet has only been exacerbated by the pandemic. Reusable cups have been shelved by cafes in favour of disposables. Gloves and masks have been added to the mountain of debris that humans toss aside. Every bin is brimming over with our crap and it just takes one gust of wind to send it flying.

You too can make a difference. A community litter pick is happening somewhere near you and all you need to do is find it. Check out Plastic Patrol who organise clean-ups that combine fitness activities, Keep Britain Tidy, and Clean Up UK.