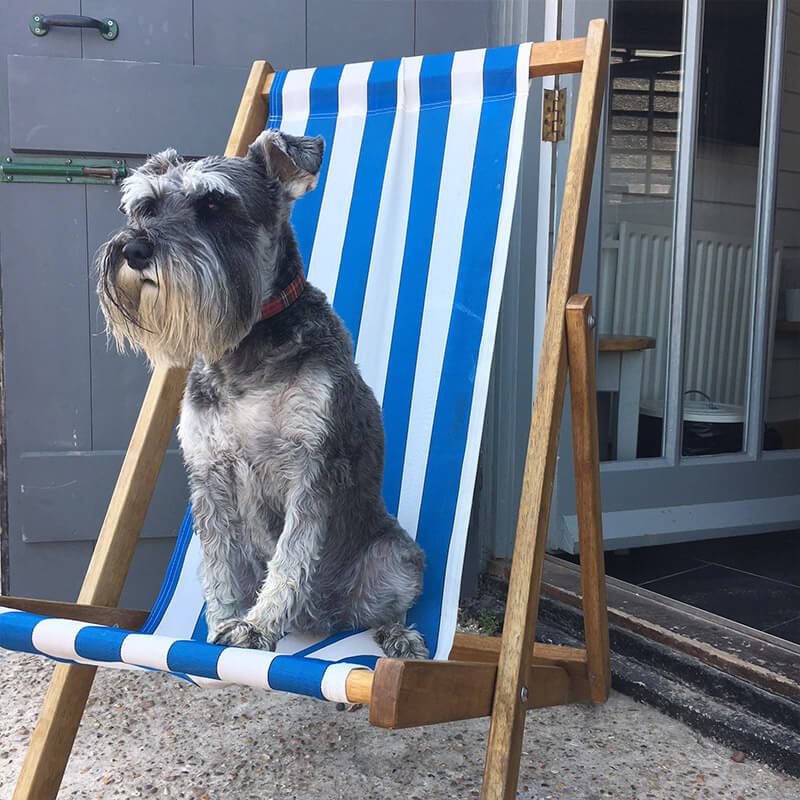 My other half celebrates his birthday in summer so we usually take a few days off with Ricci, our mini schnauzer. Last summer saw mediterranean-style temperatures. By the time we headed for the coast all three of us were desperate to escape the heat of London and breath sea air. If you are looking for a dog friendly escape from the city this might be the perfect mini-break. 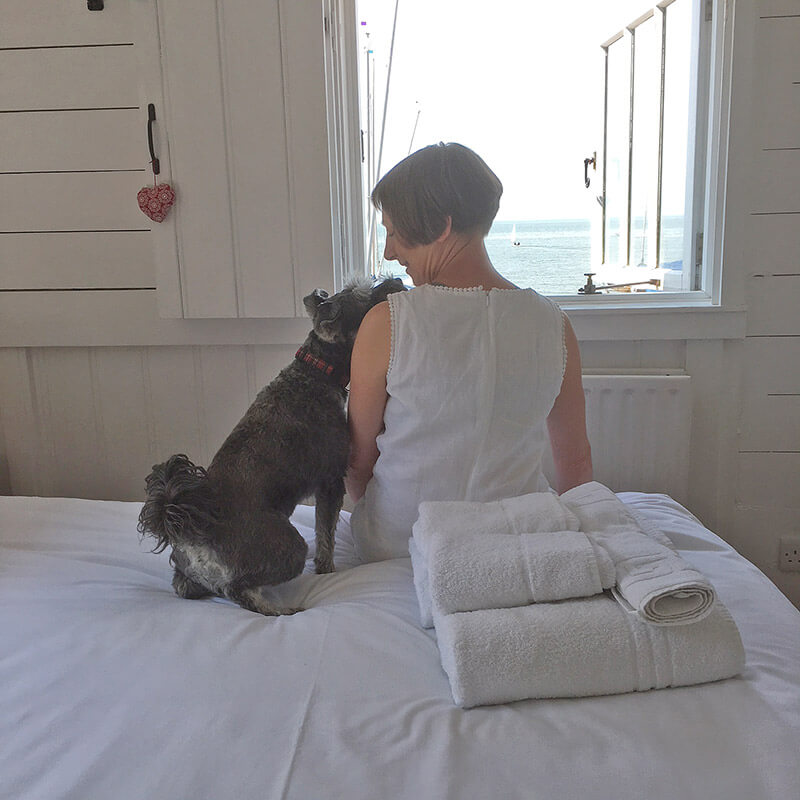 Fishermans Hut No.6 in Whistable

We set out after a late birthday breakfast on Thursday morning. We don’t have a car so we hired a Zipcar on a four day bundle – dogs are allowed as long as they’re in a crate or carrier. On route we stopped to buy a cool mat for Ricci which proved to be a great investment. Whitstable is only 60 miles away but it always takes time to get out of London. It took about an hour and forty to drive there, not including our stop.

We stayed one night in Whitstable’s famous Fisherman’s Huts. We had hut 6, located on the harbour wall with a sea-view and dog- friendly. You collect keys from the Hotel Continental where breakfast is also served. We ate our breakfast, which is included in the price, on the shaded terrace looking out to sea. Dogs are also allowed in the bar dining area.

The black painted two-storey huts are cute beyond belief. They are historical buildings so they are tiny with low ceilings and ladder stairs. Be aware that anyone over six foot is going to have to watch their head! The sea-view was from the bedroom window overlooking a pretty boatyard. It was a hot night so we left the windows and shutters open but this meant we awoke early to the sound of seagulls. The silver-lining to rising early is you get to admire the sunrise.
There are deck chairs to sit out front but the the harbour wall and car park obstructs the view. Each hut has its own small parking space. Reversing into ours proved impossible. We only managed it when the occupants of another hut moved their vehicle. Even so it was pretty hairy and I had to put the birthday champagne on ice until after the manoeuvre.

Whitstable’s most famous restaurant, the Royal Naval Oyster Stores doesn’t allow dogs. The Sportsman in nearby Seasalter has a Michelin star and does allow small well behaved dogs. Unfortunately you need to book three months in advance.

There are plenty of dog friendly options nearby though. You can eat pub grub on the beach (or in the bar) at The Old Neptune. The Pearson’s Arms gastropub and the French restaurant Birdies are both dog friendly.

At lunch we shared a plate of fish and chips overlooking the beach at the Hotel Continental. From here you can walk the coastal path that runs in front of the hotel all the way to Herne Bay. The route takes in colourful beach huts and the grassy slopes of Tankerton. The Seaview cafe is a great stop-off before the dog friendly seascapes of Swalecliffe.

98% of beaches along the Canterbury coast are dog friendly all year round. This includes the shingle beach west of Whitstable harbour. It is perfect for an evening stroll towards Seasalter before returning for supper. We ate ours watching the sunset at the outdoor tables round the back of The Lobster Shack . Owned by the Oyster Co. this place has great views and offers fish, crab and lobster meals. It’s right next door to their working fishery so it can be a bit whiffy. 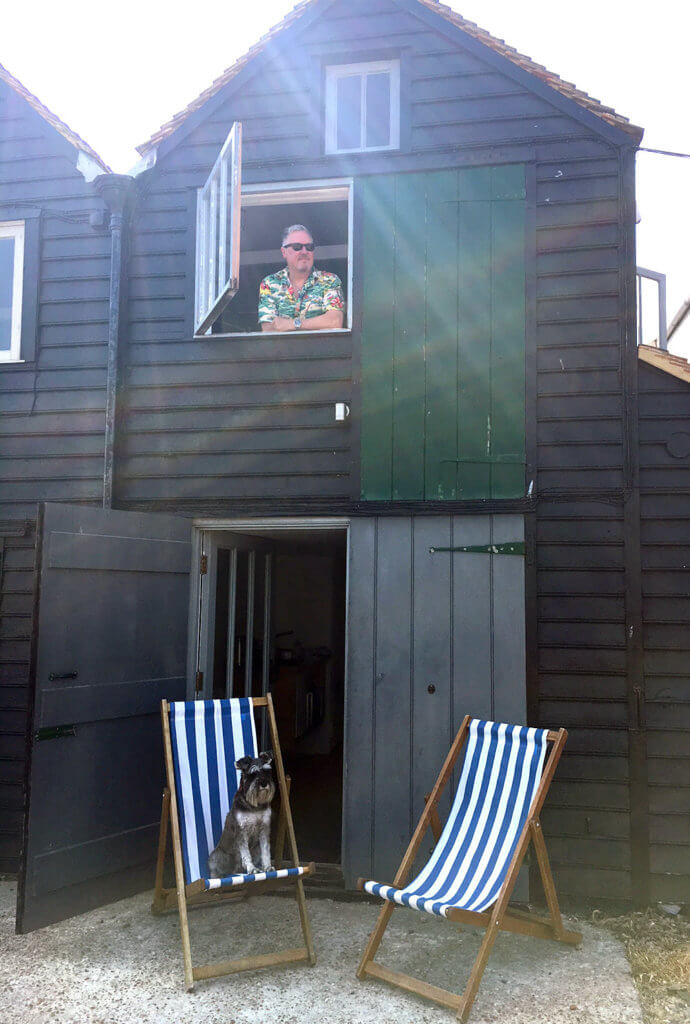 Ricci relaxes in front of dog friendly Fisherman’s Hut No.6

After breakfast on Friday we headed to Ramsgate via Canterbury. Canterbury is well worth a stop-off and if you want to stay here with your pooch try Yorke Lodge. Their website includes extensive information about dog friendly Kent.

Back on route, we drove down the hill into Ramsgate and glimpsed Albion House, our hotel, perched high above the harbour. 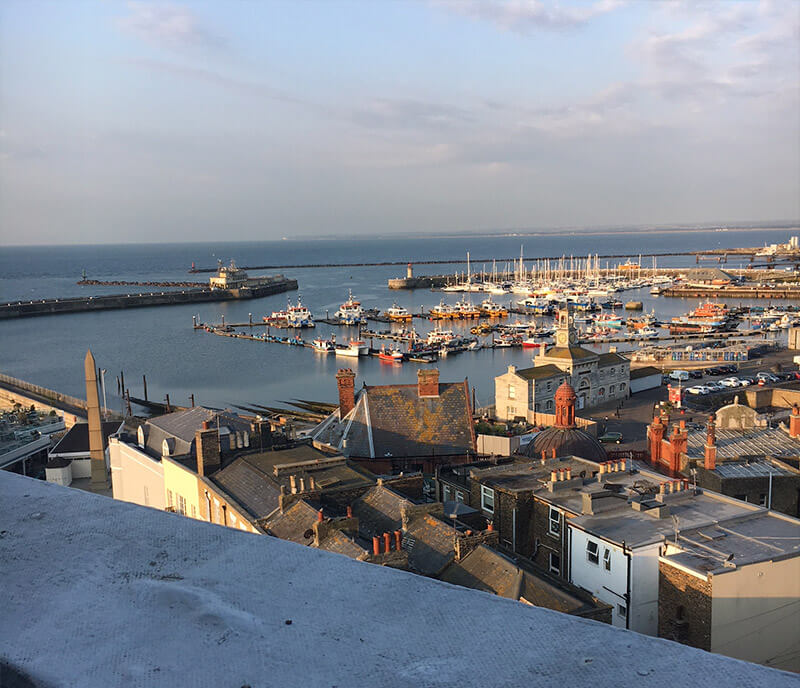 We booked two nights at the Georgian Albion House through Pets Pyjamas. We rarely book through a travel agent but the fab website and promise of a dog friendly stay was seductive. Ricci was warmly welcomed with a doggy bag of treats. This stylish boutique hotel felt sumptuous after the spartan fisherman’s hut. It had a huge bed, a marble tiled bathroom, deep carpets and a foyer full of Peter Blake artworks.

Our sea view room was at the very top of the house and it was hot – even with the windows open – but a vertical fan helped us sleep. They supplied a bed for Ricci along with a dog bowl, a chew and a ball. The two rooms felt spacious and the hotel was a sanctuary from the heat. 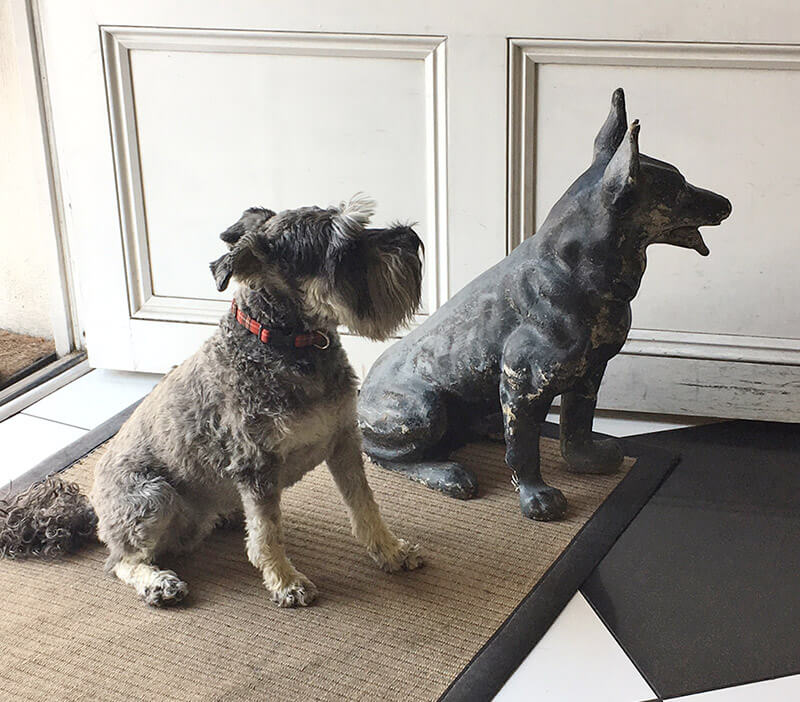 Ricci with a friend at the entrance to Albion House 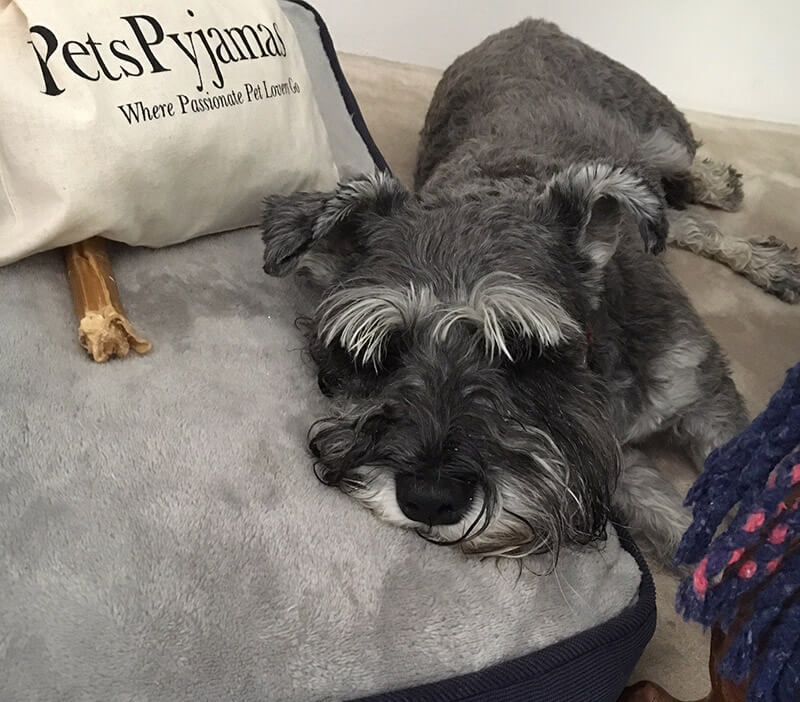 Ricci makes herself at home at Albion House

A swim before breakfast

I’d pre-booked a table for dinner on Friday night at the hotel’s dog friendly restaurant, Townleys. There was a busy event on so they showed us to the elegant parlour dining room next door with a view of the harbour. Ricci curled up under the table happy to have carpet instead of floorboards.

Breakfasts were sublime. There was cereal and fruit followed by a cooked menu. The choice included a mini fry up and the quintessential mashed avocado on sourdough. We got our first taste of Kefir water too. This fermented drink is a probiotic and it’s even tempted us to have a go at making our own.

On Saturday morning we took towels to swim before breakfast. East Cliff beach is a short walk away and dogs have access to it all-year-round. Only a small section of sand remains at high tide, but it’s enough to have plenty of fun in the surf. The main beach at Ramsgate is out of bounds between May and October. To be honest it’s no loss, flanked as it is by a huge Wetherspoons and all the usual litter and food left behind by humans.

At low tide tide the walk along the beach between Ramsgate and Broadstairs takes less than an hour. The beaches are dog friendly between East Cliff and the headland at Broadstairs. Dumpton Gap is a lovely bay half way along with it’s own cafe. We walked from Ramsgate at high tide. Take the clifftop route, through King George IV Memorial Park, then down to Dumpton Gap. The final stretch is along the concrete promenade into Broadstairs. It’s easy to walk in one direction and take the Loop bus back. It runs between Margate, Broadstairs and Ramsgate! On a cooler day it would be great to walk all the way into Margate. A good spot for lunch is the dog friendly seafood restaurant Wyatt & Jones in Broadstairs.

In search of supper on Saturday we headed, on foot, for The Belle Vue, famed for it’s terrace – the ‘Balcony of Kent’. It was a pleasant 45 minute hike walking west of the harbour. Ricci played in the sea at Western Undercliffe, Ramsgate’s other dog friendly beach. After climbing the cliff to Pegwell we arrived to find a fabulous view but a basic food menu. After one drink eight tired feet padded back into town.
Luckily we stumbled on The Falstaff which was still serving supper. It’s a boutique hotel and restaurant in the heart of Ramsgate with one dog friendly bedroom. We both had burgers; his was steak and mine was portobello mushroom. We returned to the Albion fed, watered, exhausted and happy.

Sunday was all about visiting a stylist friend in Margate to see her house renovation. This seaside town is going through a rapid renaissance. This faded Victorian resort is now the destination of choice for London’s hipsters. It deserves a whole post to itself. To say it was busy is an understatement. Extended families and the beautiful young had all donned swimsuits to enjoy the sun, sea and sand.
Needless to say we spent our day admiring a pink bathroom and swimming in Margate’s tidal pool.
There’s a bit of confusion over dog restrictions on the beach in Margate. After a proposed total ban many of the signs are now out-of-date. Check the dog friendly pages of the

website for the latest information. According to locals Palm Bay seems to be where the cool dogs hang out. Many of the beaches allow dogs before 10am and after 6pm even in the summer months. Early and late walks are perfect for Ricci who hates the midday sun.
You can dine with your dog at many of Margate’s eateries. Two are that are worth a mention are Angela’s for seafood and GB Pizza Co for thin crispy pizzas.
If you want to stay in Margate the eccentric Wallpole Bay Hotel is pet friendly. I can also recommend Pearl House which is a pet friendly airbnb.
After the beach at Margate we were homeward bound for a sweltering London. Ricci was already dreaming of her next pet adventure. 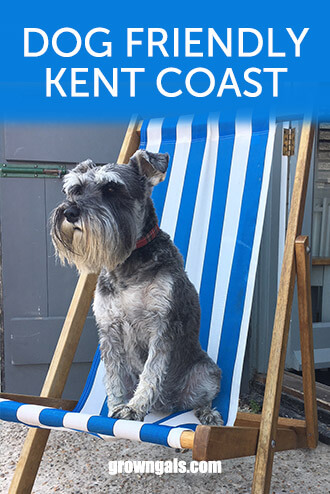