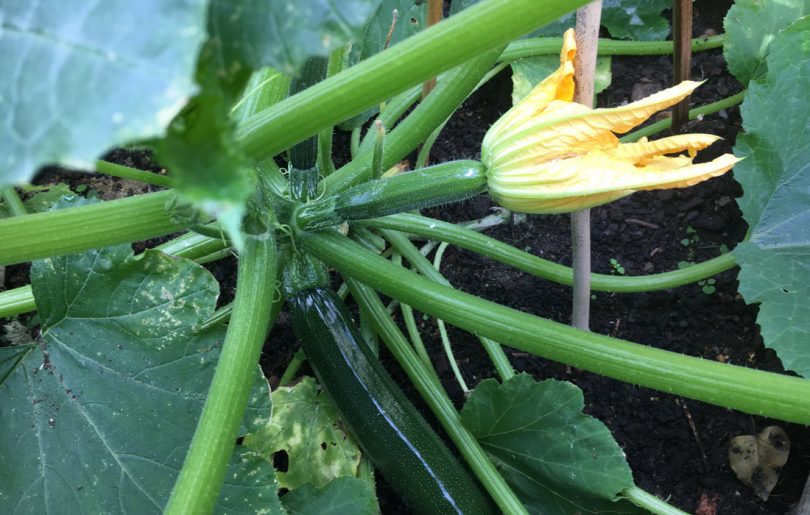 I have what I like to call a ‘secret garden’. It’s actually a neighbour’s walled garden, which they don’t use. It’s entered through a locked gate like in a tale from Beatrix Potter. I’ve been growing fruit and veg here for a few years. I’m nowhere near self-sufficient but I do have tasty produce that comes straight from the plot to my plate.
I’m thrilled to say I’ve won prizes for beans, herbs and dahlias in Hackney’s De Beauvoir flower and produce show. It’s not the greatest accolade – the show attracts no more than a handful of entries. But it is evidence that my growing skills are improving.
As a veg plot beginner I want to share what I’ve learned. A previous post describes the disaster of my initial growing season: ‘Borrowing my neighbour’s garden – my first allotment’. Slugs efficiently ate everything I planted. Disheartened but not defeated, I doubled my efforts. First, in November, I watered in slug-eating nematodes from The Green Gardener. Then I improved the soil with a fine horse manure from Thompsons of Crews Hill. Finally I got hold of a cold frame to protect seedlings. The winter prep paid-off and I recommend that anyone interested in growing does the same. Come spring, you’ll be all ready to go with rich, fertile soil.

The summer of 2018 was as hot as hell. Keeping my crops watered is a huge problem in the secret garden because I rely on collecting rainwater in a water butt. When the storage tank runs out I have to carry tap water from my house 200 yards away. The ritual of rotating water rations so that each crop gets a soaking every few days is exhausting.
We take our water supply for granted but gardening has given me think more about drought. Many poor countries experience famine when the rains fail. Climate change means less rain for some and floods for others so vital crops wither or get washed away. Gardeners understand that water is precious and nothing can grow without it. Our ability to feed the planet in the future is looking desperate if we continue to ignore climate change.

I eat lots of salad. Salad leaves need plenty of water to be sweet and tender. I grow mixed leaves as a cut-and-come-again crop in the cold frame. Large polystyrene containers, salvaged from the fishmongers, are perfect. Poke drainage holes in the bottom and fill with compost. Keep them in a little shade to prevent them going to seed too soon. I like Japanese mizuna leaves which are a bit like rocket but, for me at least, less prone to bolt.

I’ve tried growing celery but, although full of flavour, the stalks were tough. It was only useful for making stock. Self-seeded spinach and chard grow all over the plot and I pick young tender leaves to toss into mixed salad leaves. Older, thicker leaves are delicious wilted in pasta sauces and my favourite filo parcel recipe. Bumper crops of French beans make their way into salads, lightly steamed and still crunchy. The same goes for baby courgettes which are delicious ribboned in a salad. 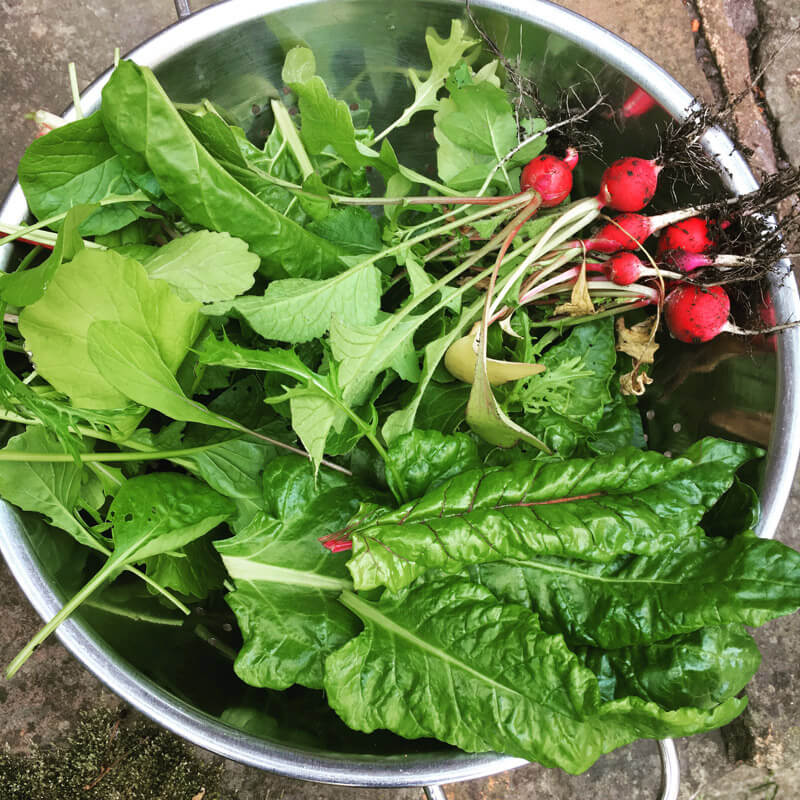 The fruit bushes in my local garden centre were too expensive. I bought blueberry and gooseberry bushes from Columbia Road flower market instead. You can find them on the herb stall run by Mr and Mrs Grover. They fruited well in their first two seasons and look in great condition for the next one. I am learning that gardening requires patience. Plants take time to become established.

I’m growing summer and autumn fruiting raspberries as well as a loganberry. The raspberries are always plumper after heavy rain so I’ve worked out they like a good deep drink. The garden already contained a feeble blackcurrant bush, a clump of rhubarb and some strawberries. These plants are all now flourishing having benefited from my home made comfrey fertiliser (see below). Soft fruits need harvesting as soon as they ripen to beat the birds and insects. When there’s a glut pick and freeze or compote – any delay and you’ll lose them.

I’ve been growing several varieties of tomato. I bought Sungold, Gardener’s Delight, Tumbling Tom and Shirley as plug-plants. My friend donated Flamingo and Rosella from a batch of seedlings inspired by James Wong. His book, ‘Grow for Flavour’, recommends keeping plants small and feeding with molasses. He also suggests giving them an aspirin spritz. I tried to follow his regime but my life is busy and I’m never on top of pinching out side-shoots. Even so the red, yellow, orange and pink tomatoes have been plentiful and delicious.
By early September the remaining green tomatoes started showing signs of blight. I picked them before they turned brown to make green tomato chutney. When you’ve enjoyed home grown tomatoes all summer it’s hard to shop at the supermarket again. 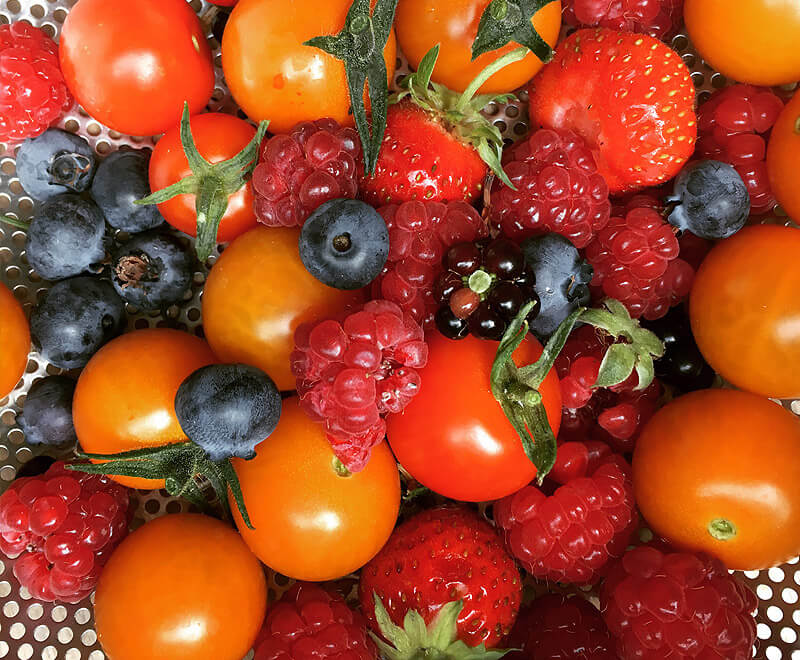 Broad beans are my favourites but they didn’t grow well. I grew them and some beetroot from seed and both were disappointing. I’m doing something wrong. By contrast the French beans, which I bought as plug-plants, cropped for a good three months. I should, however, have given each plant it’s own sturdy bean pole. I made the mistake of crowding two plants to a triangular bamboo frame. The poles couldn’t take the weight of the growing beans and began to collapse. You live and learn. We’ve enjoyed them steamed, stir-fried, hot and cold. If you don’t harvest them young the flesh becomes thick and tough. Pop the sweet beans from shell and cook them instead. 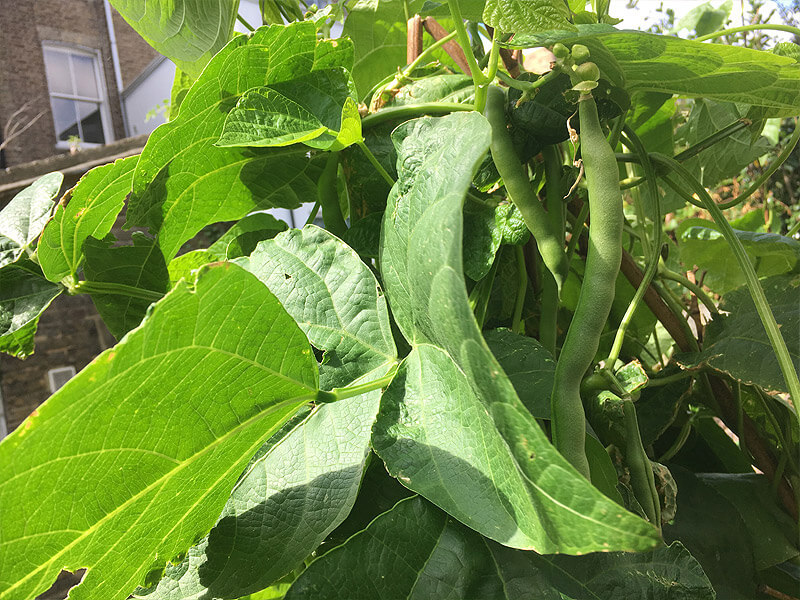 An unexpected treat was a small and tasty crop of new potatoes. They grew from a few potatoes left in the ground last year. I decided to leave them growing to see what happened. They were the best potatoes I’ve eaten all summer. 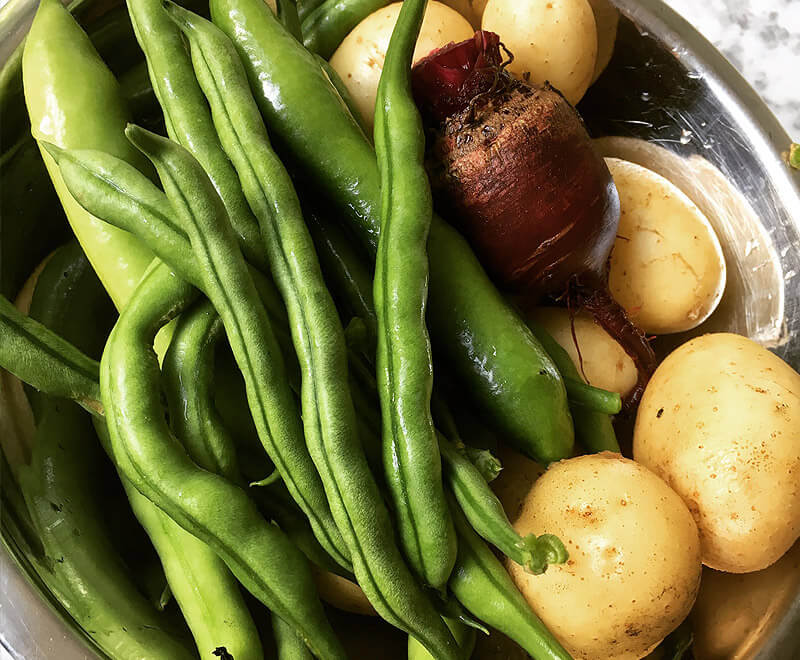 The other veg success has been courgettes. I bought small plants, and grew them in pots in the cold frame until they were well established. Last year I planted them out when they were too tender and the slugs ate them. The real joy of courgettes are the edible flowers which you can stuff and fry for a dinner party triumph.
Growing alongside the veg are mint, oregano, thyme, tarragon, comfrey, sage, flat leaf parsley, rosemary, basil and Thai basil. It’s lovely to have handfuls of fresh herbs to add to your cooking.
Comfrey Feed

Rather than buy chemical feeds it’s easy to make your own organic fertiliser from comfrey leaves. Steep the leaves in a covered bucket for 3–4 weeks until the liquid is brown and smelly. Dilute with 1 part to 10 parts water and hey-presto you have free liquid feed!

Gardening isn’t everyone’s cup of tea. It takes a certain type of woman who doesn’t mind split and grubby fingernails. But for some of us it’s therapy, pure and simple. I love it and as I grow older the more I enjoy growing my own food, cooking, eating and sharing it. In a mad, bad world it helps me close the circle of life. 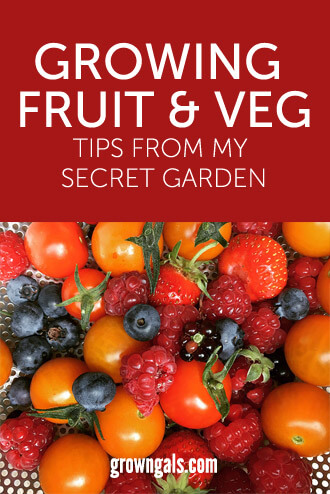