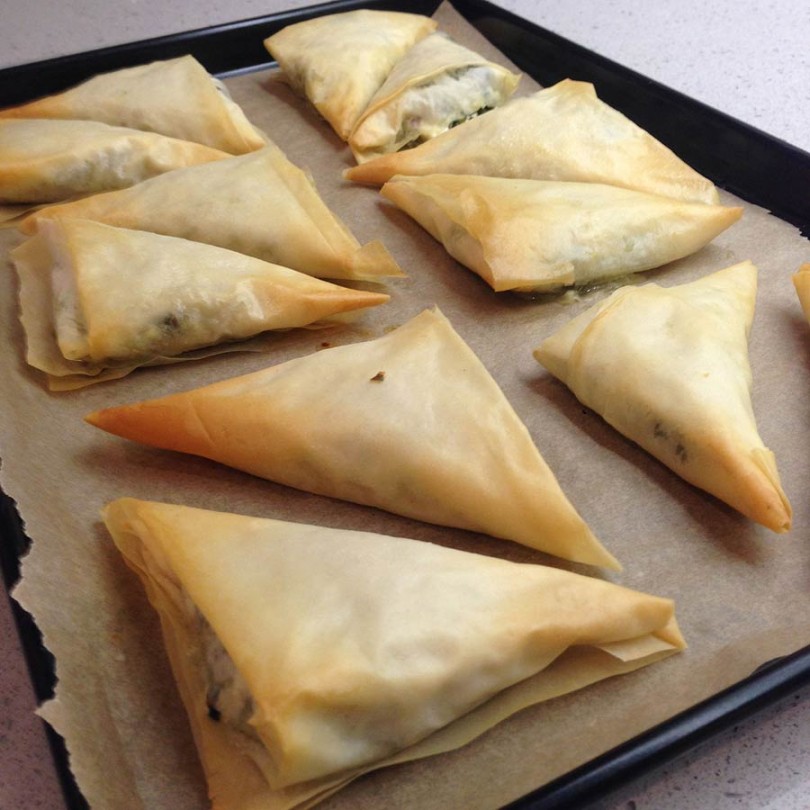 I don’t know why I decided to take pics of making tonight’s veggie supper –but somehow it happened and I’m now sharing my midweek feast. This is one of my favourite recipes. Feta and spinach are a classic flavour combination and these parcels are great for lunch boxes, picnics and finger food but are best served fresh from the oven with a selection of meze style salads. As a non-meat eater I always want to show off how scrummy vegetarian food can be. This recipe ticks all the boxes.

I warm my fan assisted oven to 180˚C. Squeeze all the liquid from the spinach so it’s as dry as possible and roughly chop it up. Place in a bowl with the spring onion, feta and pink peppercorns and mash together well with a fork.

Take a sheet of filo (mine was approx 36 x 22cm) and cut it in half, fold each half lengthways so you have a folded rectangle 9 x 22cm. At one end place a spoonful of the spinach and feta mixture. Fold up the parcel starting at the bottom right corner which folds over the mixture to make a triangular pocket. Now fold vertically (so you seal in the mixture), then diagonally, then vertically and finally on the diagonal to create a neat triangle. The pics below show it step-by-step. 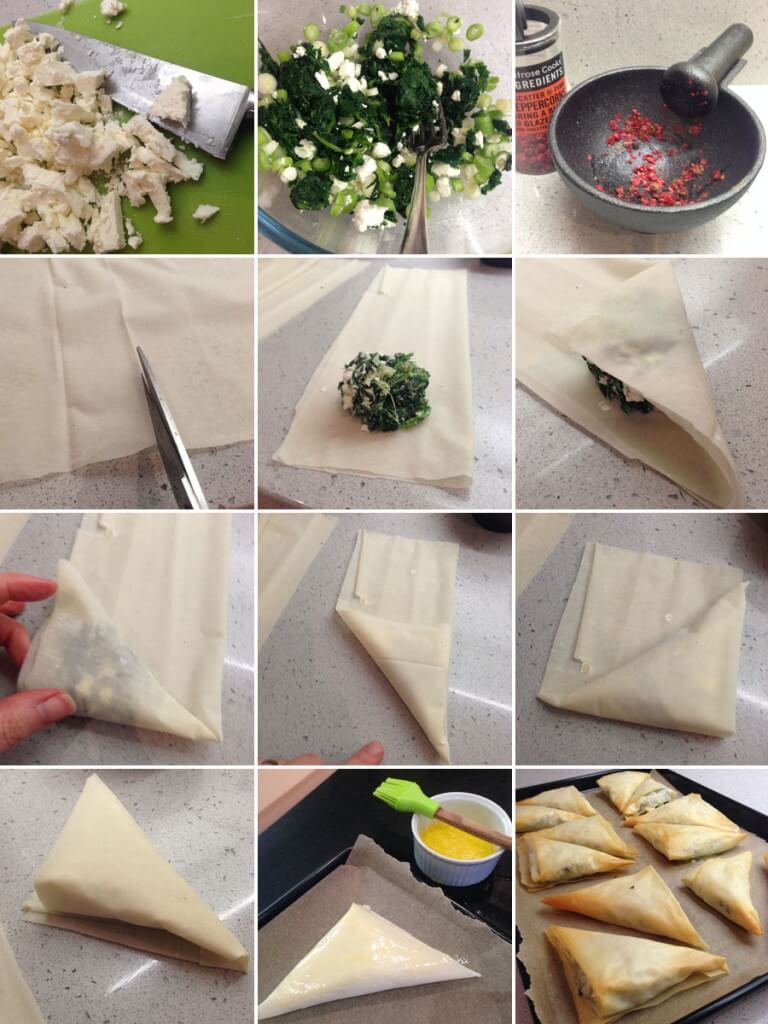 Place the parcels on a baking sheet covered with parchment paper and brush the top with a little melted butter. Work quickly through the rest of the mixture taking just one or two filo sheets out of the packet at a time to prevent them drying out and becoming too brittle to fold.

Bake for about 15 minutes until golden brown and crisp. The filling may ooze a little – but that just makes them look even more delicious!

To complete our midweek veggie supper I made three quick salads to serve with the parcels alongside some shop-bought houmous and baba ganoush:

Pea and bean mint salad
I always keep bags of spinach, petit pois, baby broad beans and shelled edamame beans in the freezer. They come in handy for range of veggie suppers including risottos, soups and salads. In this case I scooped a cup each of frozen peas, broad beans and edemame beans into a saucepan, brought them quickly to the boil and simmered for two minutes. Rinse with cold water and allow to drain. Dress with a honey, mustard, lemon and olive oil dressing (remember to season with salt and pepper to taste) and a generous amount of freshly chopped mint leaves.

Tomato and black olive salad
In March the tomatoes in the shops are not really sun ripened enough for this recipe – but it’s still a classic combination that tastes good. I’ve used baby plum tomatoes because they have some flavour at this time of year. In the summer I like to mix yellow and red tomatoes for the best colour. Chop the tomatoes into a bowl. Drain a can of stoned black olives and use the equivalent of half the volume of the tomatoes. Half the olives and add to the bowl. Drizzle the bowl with olive oil, lemon juice, a little sea salt and torn basil leaves if you have them. With a pestle roughly crush the tomatoes and olives together so the flavours merge.

Kidney bean and spring onion salad
I had a few kidney beans leftover in the fridge so I mixed these with finely chopped spring onions and drizzled with the same honey dressing I used on the peas and beans.

That’s it. Just remember to allow the salads to get to room temperature before eating so that the flavours have time to infuse.

If you like this veggie supper recipe you might like some of the recipes in my 5-day Detox diary or wild garlic pesto – recipes for foraged feasts. You can also read a very good article on the nutritional value of cooked versus raw spinach in the Vegetarian Times – needless to say both are good for you! And if that isn’t enough check out the Happy Happy Vegan’s post spinach 101. 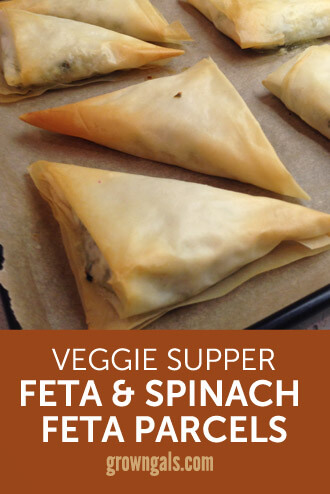