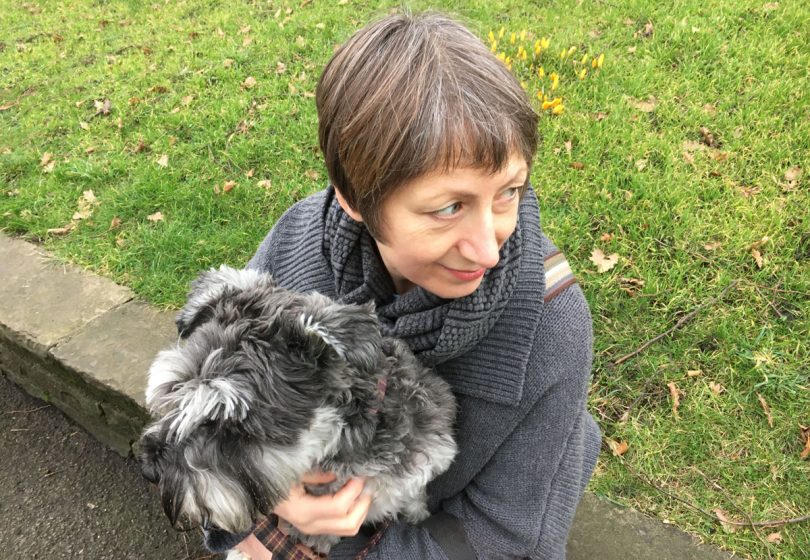 I’ve updated this post after a year to share the results of growing out my grey hair. I haven’t turned into a silver surfer – not even salt and pepper! But I am free of hair colour…

My new year’s resolution is to grow out my hair colour to see what’s lurking beneath. From my root growth I know that my natural dark brown locks are streaked with silver strands, but I’ve been using colour for so long that I’ve no idea of the extent of my grey hair. I need to discover who I am – even if I decide to go back into disguise afterwards. I would actually love silvery locks and think women with grey hair can look amazing (check out the grey hair on my ageless style Pinterest board). 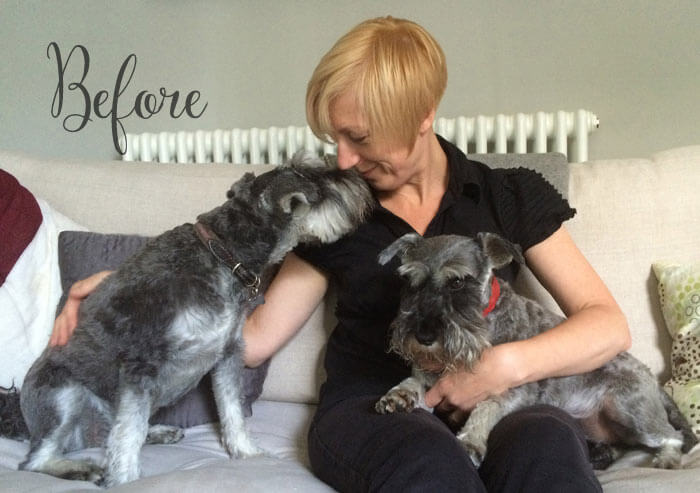 Like a lot of midlife women I went lighter because I felt that a) the paler colour might suit my older skin tone and b) I’d always fancied being blonde. While I was happy being blonde it is hard work keeping on top of the roots. Even though it’s currently fashionable to show dark roots, it makes my hair look greasy. It was time to free myself from the never-ending cycle of hair colour.

There are two methods:

COLD TURKEY – this involves nothing else but to let the blonde hair grow out in an ever-descending hard line (and presumably wear a hat for several months).

DO OR DYE – this means colouring the high-lift blonde bits with a semi-permanent colour as close as possible to my brunette roots. I will still need to wait for the permanent line to grow-out but, in the meantime, I might be vaguely presentable. I say ‘vaguely’ because there will be many a glum in-between week when the semi-permanent fades enough for the roots to stand out again.

Having decided on the second option, I chose an iced chocolate semi-permanent colour. I did a test first after I read online that brown on blond can sometimes go green. I was a brunette for my first WI meeting of the year (hula hooping) and most of the women hardly noticed. 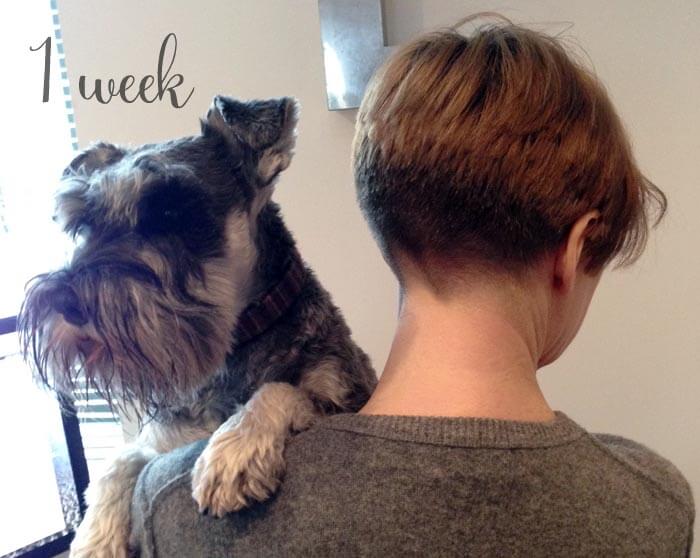 One week in and the colour is already beginning to fade on the blonde bits. I also had a cut, so the very short back is now natural and there isn’t much grey hair in that bit. My slightly horrified hairdresser, who has coloured my hair for about 15 years, was shocked. I had undone all his careful work in one go. He told me not to use the semi any more but just let it grow out. All I can say is – we’ll see!

I plan to update the results monthly, meanwhile you have a picture of me blonde in December and brunette in January both taken with Schnauzers so you can compare my hair to the salt and pepper I can only dream of.

You can see from the pictures below that one month’s worth of hair washing turned the semi permanent colour (washes out in 24 washes) to a golden brown. It also revealed a very distinct line between the fake and the natural colour of the roots. I can see a bit of grey, especially at the front, so I think I’m going to have a nice ‘Mallan’ streak when it finally grows out (a reference clearly designed to show my age). The second picture (right) shows a rather bolder red wash-in applied to blur the ‘line’ effect. It’s a bit warmer than I had imagined but it will wash-out pretty quick so I may as well have a bit of fun. 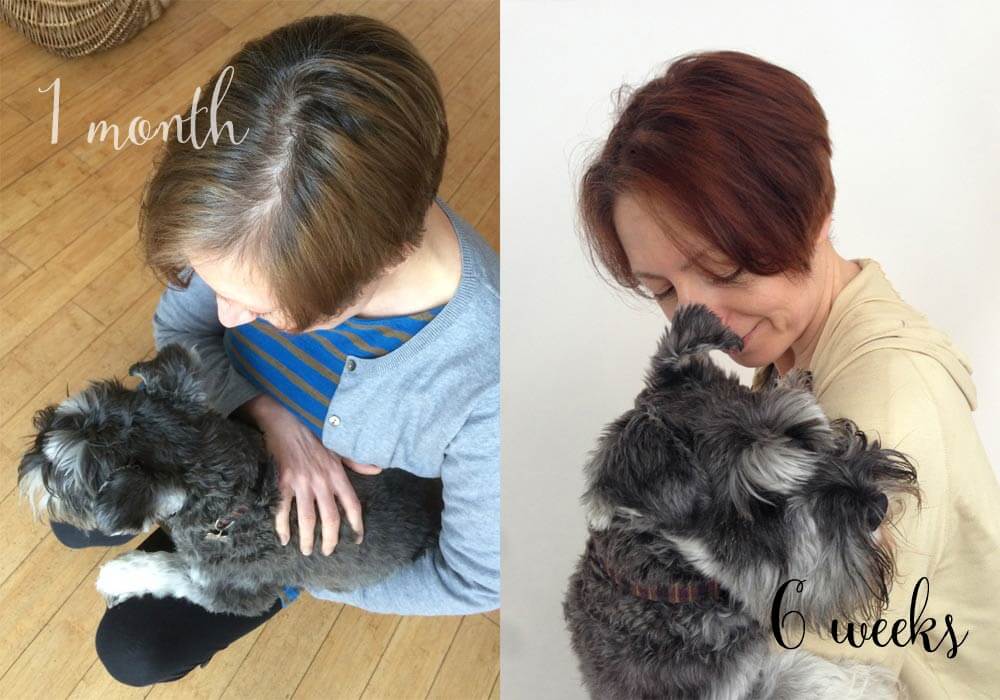 You can now see the grey quite clearly and the shock of red applied in February has already gone. I’ve decided not to do the second red wash-in (bought as a 2-for-1 deal). I’m just going to bite the bullet and let the lighter colour grow out. I’m pleasantly surprised that I don’t have quite as much grey hair as I thought I had. Most of it is at the front – but there is quite a bit at my temples which is still disguised under the coloured longer-length on top. My hairdresser is suitably appalled – but I hope you will agree that he does a very mean cut! 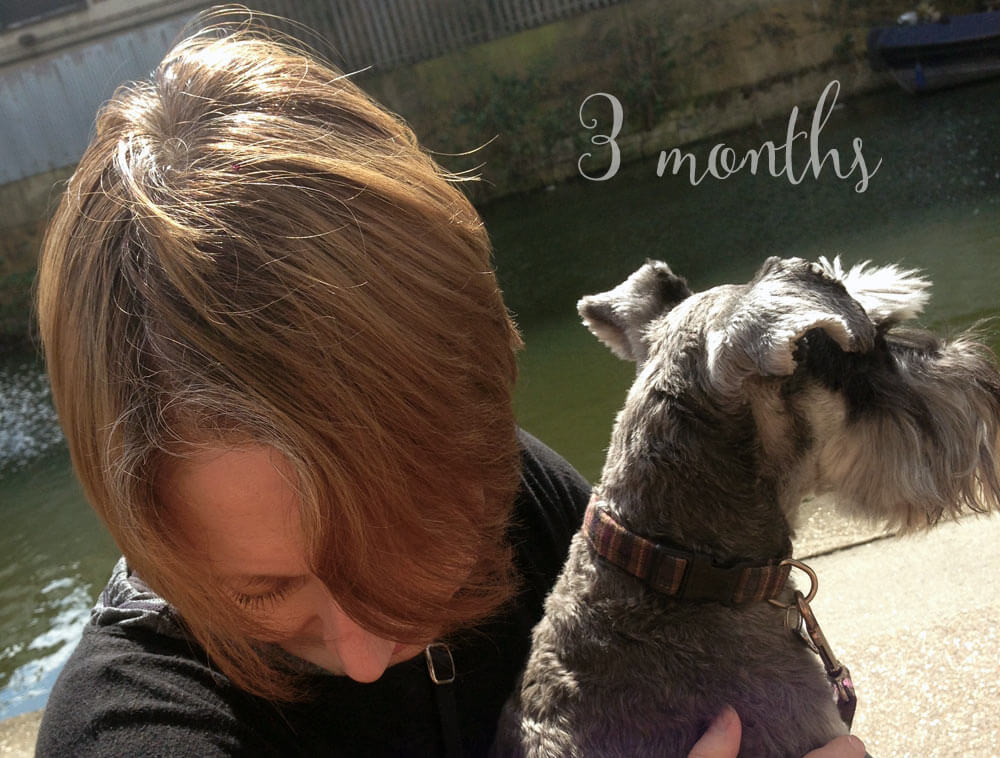 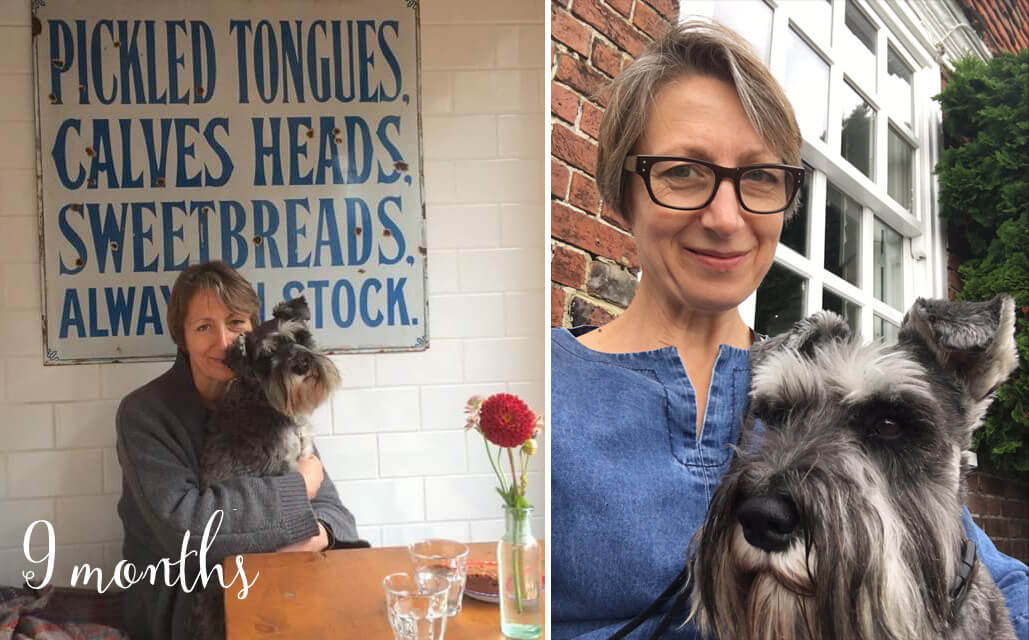 12 months and it’s not quite grey hair

I failed miserably to keep a monthly picture diary – largely because the transition to my natural colour has been slow and barely noticeable. Also because my relationship with the camera is not a good one. Those eyebags, droopy lids and hanging jowls belong to someone who is not me.

One year on and I don’t have grey hair as such – just strands of it. My very short bob is shot through with various shades of grey and brown that reflect light. My hair colour changes with the weather. What is fabulous is to be free of the shackles of hair dye. I’m learning to come to terms with the ageing process. I’m owning my grey and tying hard to own my crow’s feet. 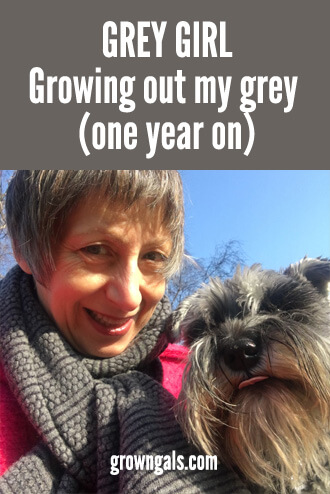