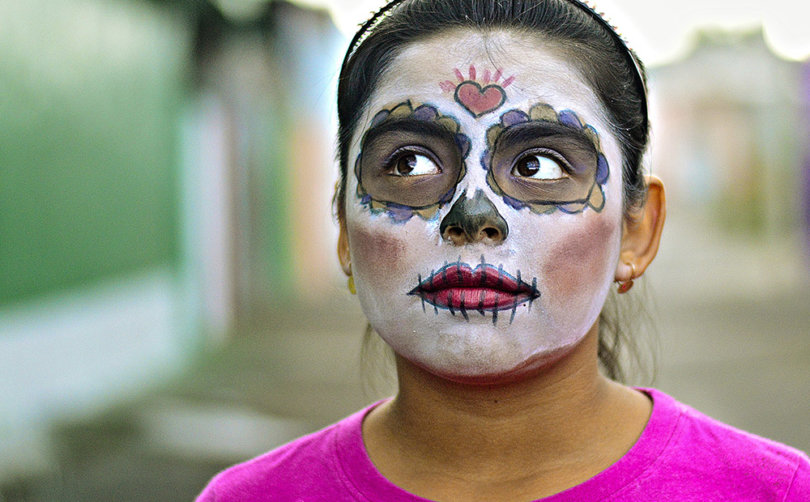 With Halloween and Day of the Dead on my mind I’ve been thinking about planning my death. Much has been written about how to live our best life but not about how to die well. It is the great taboo. I know exactly how I want to go. I want to slip away in my sleep, peacefully, mid-dream with a smile on my face. Isn’t that what we all want? The odds, however, are stacked against us. Is it possible to plan a good death? I don’t know – but I sure as hell want to try.

Death firmly plants itself in our conscious somewhere around midlife. The summer weddings of our youth give way to winter funerals. We begin to think of the future as a bucket-list of adventures before the engine packs-up.

At 56 I’ve watched both my parents die. It was nothing like the movies. Death was slow and torturous. My father had bowel cancer and though the pain was controlled he lingered longer than he expected, or wanted. If he had been offered a drink that would have allowed him to kiss us, then slip away, he would not have hesitated. Forcing someone to endure a natural death affords them less dignity than we would give an animal. We all understand what a merciful release means.

I understand all the arguments that defend the right to life. I would never presume to take it away. In many faiths it would be a mortal sin to shorten your own life, even by just a few hours. But for me, personally, I would like the option to leave the party a bit early, before my lipstick rubs off.

We need a say in how we die

When you’ve witnessed the slow painful death of a loved one you realise that something has gone wrong. The mood towards death is changing. The Guardian reports that over 90% of us now support assisted dying for the terminally ill. Put simply, making people suffer is uncivilised.

What are we if we cannot legislate to offer a swift, painless and peaceful exit to those who want it? Canada, Belgium, the Netherlands, Luxembourg, Switzerland, several US states (including California) and Victoria in Australia, all allow physicians to assist in the death of patients.

Sooner or later our politicians will be forced to change the law. Meanwhile medical advances mean that some people are held in death’s waiting room indefinitely. What constitutes quality of life is different for everyone, it’s personal. We should each be able to decide for ourselves when enough is enough.

It’s never too early to have a plan. In the UK it’s called an Advance Decision or ‘Living Will’. It puts on record what medical treatment you don’t want in the event of no longer being able to communicate or make your own decisions. It’s important to remember that the job of the medical profession and care professionals is to keep you alive – however miserable the circumstances.

After a series of strokes my mother lived a care home for almost five years. Her experience has informed all of my decisions about what I want for myself in similar circumstances. I do not want doctors to intervene to prolong my existence if I no longer have my faculties or the physical ability to participate in life.

Your wishes will always be open to interpretation but hopefully a Living Will will help your doctor understand when to prescribe something to make you more comfortable and when to stop. Pneumonia, for instance, used to be referred to as the ‘old man’s friend’ because it was a relatively peaceful death. Now it is regularly treated with antibiotics – which is good news if you are still living an independent and full life. It’s not so good if you’re in an unbearable limbo and hoping this will be your time.

You can also make an advance statement which describes the things you do and don’t like such as food, music and entertainment. This one is not legally binding and relies on having an advocate to enforce your wishes. I’m a vegetarian, for instance, and have a dread of ending up in a care home being force-fed beef stew.

Being childless makes me extra anxious about all this. If I’m left on my own who, for instance, will be my Power of Attorney? I have a dream of a community of Grown Gals where we will be able to look out for one another (watch this space). But if that dream isn’t realised I will need to find a special someone to entrust with my plan.

For years I’ve been flippantly saying I will take the train to Dignitas in Switzerland when my time comes. But it’s really not that easy. How will I know or decide when to go? Will I become befuddled in increments and forget the plan altogether? Or will a catastrophic event, such as a stroke, prevent me from making the journey?

In preparation I recently applied to become a member of Dignitas. My other half thought it was premature. He hopes things will have changed by the time our turn comes. In the end I decided to postpone and make a donation instead. I am profoundly grateful they exist so it’s the very least I can do.

Another part of my plan is to swat up on plants that will provide me with a toxic back-up. I think I might enrol as a witch. I’ve written before about my love of foraging but I do fancy learning about poisonous plants instead of edible ones. I would love to have a little escape bottle by my bedside, just in case.

Lots of theories about longevity are described as hocus pocus but really they are just healthy-eating, exercise routines and programmes for mental rigour. I already ferment, pickle and brew my own fertiliser. A bit of white witchery and alternative learning might help me to stay independent and healthier for longer. My ultimate goal being to just slip away, frail but tanned, happy and fulfilled.

Come to my party

What I haven’t discussed yet is the party, the living wake, to which everyone I love will be invited. I don’t want to do that if I’m sick or facing a death sentence. No-one will know it’s a wake but me. One bright and beautiful summer day I shall celebrate this glorious life with a little gathering in my garden. It will be just perfect. That is the plan.

Never give up until you have to and then do it with style and grace.

Photo by Cristian Newman on Unsplash