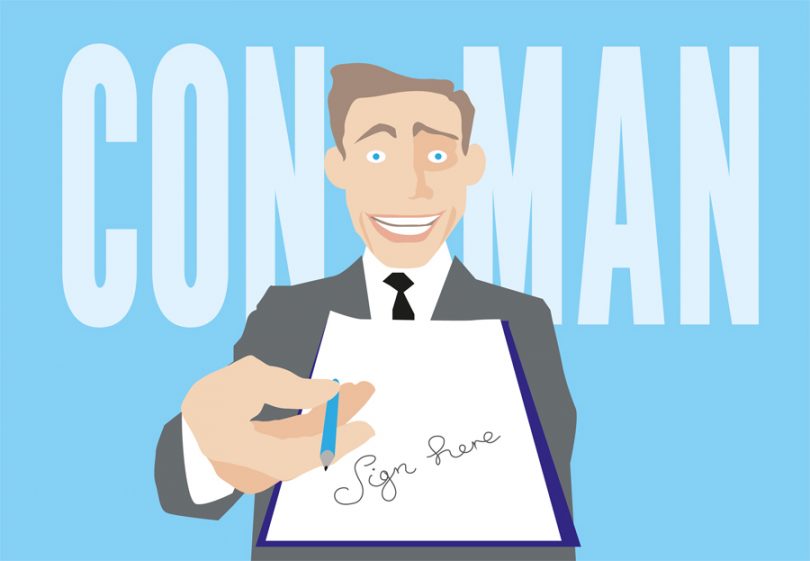 It doesn’t matter how savvy you think your parents are – one day, as they age, they will targeted by a scam salesman. I’m not talking faceless internet crime here but scam salesmen who turn on the charm and manage to get old folk to sign on the dotted line before they know what they’re doing. With a little effort you can help to prevent your loved ones from becoming victims.

We’ve all read reports about rogue traders, door-to-door salesmen and con artists but somehow we all think that we’d be wise enough to spot them. Sadly this is not the case and there are sophisticated pension, financial and ‘contract’ scams, including things like equity release, which are just on the right side of legal but still fall firmly under the ‘rip-off’ category. I am of course writing from experience.

My dad was the treasurer of his local Arthritis Care branch, which he attended as my mother’s carer. There was nothing wrong with his ability to handle his finances; he was an astute 75 year-old with immaculate bookkeeping. At one of the charity’s monthly meetings a couple of suited ‘solicitors’ gave a presentation about setting up a living trust to avoid care home fees. Almost half of those attending the meeting, persuaded by the assumed endorsement of Arthritis Care, arranged for home visits to discuss their financial arrangements, my parents included.

These men had cleverly targeted a group of people already worried about having to finance their own care. The scam played on their fears. It was too good to be true.

I knew nothing about the living trust but by co-incidence I arrived home for the weekend the day after the ‘visit’ from the solicitors. It took most of the day before mum worked up the courage to confide in me that she was feeling nervous about what they had signed the evening before. They had paid £2500 by debit card for the solicitors to draw up a living trust. The deal had included Power of Attorney for me and my brother which they could ‘throw-in’, but they had to sign up there and then to get this very special rate.

Alarm bells rang loud and clear. I took the details from the receipt and googled the business. They had a credible web page but the briefest of digging revealed that they had no affiliation with any legal firm. The contract had a 7-day cooling off period so I got my mother’s consent and wrote a letter cancelling the transaction which we posted by special delivery to arrive Monday morning. Dad was furious that I was meddling in his affairs. He was totally convinced that he had done the right thing by his family and found it hard to accept that he had been duped. He would not speak to me. I had undermined him and he felt humiliated; it was horrible.

It turned out that the company was already under investigation with trading standards and slowly my dad accepted that he had been ‘played’. Sending the cancellation letter proved crucial to my parents getting a full refund but it took a lot of effort and caused much anxiety over several months. Their friends by contrast lost all of the money they had paid. The business, sniffing the investigation hot on their heels, did a bunk.

This was a huge learning curve for me, after which I became much more involved in my parent’s financial affairs. Just before he died my father handed his files over to me and now, after her stroke, I handle all of my mother’s money. Their beautifully filed paperwork brought to light many more examples of how they had been unwitting victims of less than scrupulous salesmen. I have a particular grievance with the sale of disability and mobility equipment. Under the pretext of being specialists many of the companies selling chairs, stair lifts and medical aids send salesmen on home visits and never reveal their prices in print or online. The salesman inevitably offers a ‘special price’ and having charmed the unsuspecting victim into upgrading to a ‘premium’ model then slaps an extortionate five-year service contract on the bill. The total bill can be thousands of pounds more than buying the exact same model from another supplier.

How to protect our old folk

This is a very tricky subject to bring up with your folks. No-one likes to be reminded that they are getting older and the mere suggestion of vulnerability can make our elders put up the stop sign. I suggest a subtle and ‘long game’ approach. First arm yourself with some information on the types of scams out there, AgeUK have a good section on scams and fraud which covers everything from staying safe online to bogus traders. The following steps should provide your parents with a few scam-detection tools:

Lastly remember – it’s not just the old who fall victim to the conmen – use all your knowledge to protect yourself as well. In this case I hope you don’t have your own stories to share but if you do please consider telling us about them in the comments box below. The more we know the better we can protect one another.